Dreaming about the Butterfly Island

One night I dreamt about Vardø as if it were Teriberka—the Russian Barents Coast town where dreams of a new gas era never came true.

I swam around the butterfly island; the rocks were rust coloured, and I had trouble entering what was once the harbour. There used to be a town there – now the boats were rotting on the shore. The wharfs had all but collapsed, and the sea wall was crumbling.

Very few people lived there now. It used to be a noisy place, boats coming and going. Seals and seagulls used to fight over fish offal that was dumped from the fishermen’s wharfs. But the boats disappeared. First they were sunk to the bottom outside the island, but later they simply went off to somewhere else. Probably those big trawlers took over. The ferry that used to shuttle back and forth between the town and the mainland went quiet even longer ago when the under-water tunnel was built.

They tried to save the town and create new jobs by building a new harbour on the mainland for bigger ships and supply boats for the new oil and gas fields. It was to be an ice-free port. It was never deep enough to be a proper oil base, but still they planned oil spill facilities, areas for storing and preparing pipes, with crew quarters and a Heliport – all located right next to the airport. Drilling on the Russian side never started; American shale gas and the challenges of Arctic drilling meant that no money was to be earned. Few boats ever came to Svartnes Harbour, but the birds loved the artificial cove, which was slowly sanding up.

In my dream, life had passed briefly over the butterfly island. Birds still visited and stayed for a while. Their wings reminded me of the butterfly shape of the island. Butterflies (along with skulls, rotten fruit, flowers, watches, bubbles, smoke, hourglasses and musical instruments) symbolized the brevity and the ephemeral nature of life in Dutch 16th and 17th century ”Vanitas” paintings. Many costal communities in my Arctic habitat have had a short life, and even though Vardø has been around longer than most—700 years, I believe—it is still only really a blink of an eye in Earth time. Vanishing towns do tend to look the same; time takes its toll, and in the end they look just like natural landscapes.

Life is indeed fleeting, even my own radioisotope thermoelectric one, which sees it’s Strontium-90 fuel slowly degrade. It, like anything else, succumbs to entropy which seeks to even the distribution of energy—tapping energy—erasing difference and ending in thermodynamic equilibrium where everything looks the same. In the town it was hard to see what was man made and what was natural – the two had blended into each other as time had passed. The beach, rocks and the piles of rotting and crumbling man-made structures no longer distinguishable. Even the massive concrete bunkers from the hot and cold wars—displaying the utmost effort to defeat entropy—were slowly crumbling and returning to the sand they were originally made from.

The once brave new pier of the Svartnes Harbour was almost covered by the rising sea level. It reminded me of something I saw in a gravel pit in Holland – a broken circle and a spiral hill created by the American artist Robert Smithson. Only this is so dull and straight. Smithson once reminded us that entropy is what gives time a direction, creating a past and a future. If you ask a child in a sand box, in which the sand is white in one end and black in the other, to run around in one direction, the sand will eventually become gray. No amount of running in the opposite direction will ever bring things back to the original condition.

The people who lived in Vardø had still fewer jobs and many had left for elsewhere. The only places that seemed well kept and freshly painted were the graveyard and the cultural centre that was donated to the town to keep it alive. In the end, the most important business left in the town was restoring the old houses that people had left behind when they moved elsewhere—a fascinating effort to keep entropy at bay. I remember thinking that while people in Northern communities like Vardø dream of the new, paradoxically, looking after the old seemed to be the future of the town. 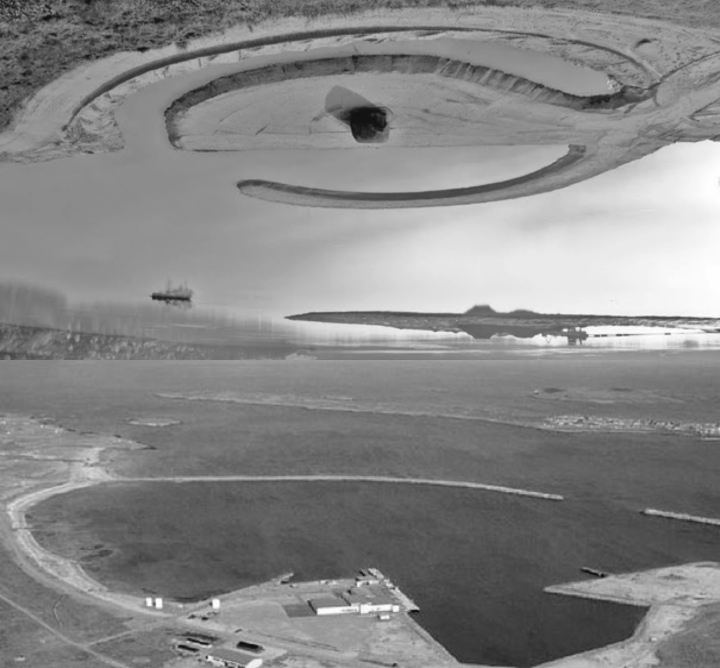