It will soon be spring up here and I see there is yet another scientific report saying the ice is thinning, that since the 1970s this has been a measured pattern and that in the not so distant future the northern passages will be free of ice for navigation in the summer. Cimate change. Changing climates if you ask me! Perhaps I will finally take a trip over to my Canadian relatives. All these changes disturb me though. I nodded off yesterday having read this news and had a strange dream.

In my dream I heard a number of researchers talking about a new project called ‘Cape To Cape’. One of them was mentioning me as a device! A fictional construct I was called. A means to discussing the near future. Dreamtime does allow for unreality, after all, so I went along with this speculation!

And then I heard another voice. It was a woman this time, from Cape Town of all places. She was talking about … my relative. A fish called Fiscilla. A fish. Look dreamers, I am a mammal!! They have something really wrong with their post-species typologies. Amphibians I can understand up to a point. 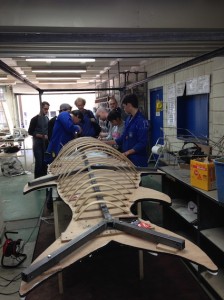 Anyway, this Fiscilla is pretty fascinating. She’s a co-construction by designer-researchers, teachers and students at CPUT. They crafted her to be an artifact that mediates climate change, travelled with her up through the dry interior all the way to Namibia to a conference. A tiger fish, fierce and beautiful. Gathering stories and experiences, students’ own ones too, local communities and understanding about how knowledge may be built through designerly processes and techniques.

I woke up feeling strangely connected, a sister traveller, a second group of communicators, a sense that climate change is being discussed more widely across time and space. And that my dreamtime is richer than I knew, populated with similar thinking things! And a few people moving from Cape to Cape.