A summer in the north 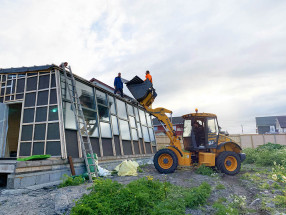 Ida Højlund Rasmussen spent the summer of 2022 in Finnmark doing fieldwork connected to her PhD project focusing on soil, landscapes, and resource management in Vardø.

In Vardø, I participated in dugnad at the newly built community greenhouse, a project developed in cooperation with the Common Resources project and designed by architecture students from In balance – Arctic Cycles, a course led by Tine Hegli and Kristian Edwards. Further, I talked to people in Vardø, co-gathered herbs with the local chef, harvested a small acre, visited archives, wandered in the landscapes, and got a sense of Vardø as place.

“When it happens, it happens quickly and we get things done”, one of the locals stated during a dugnad when addressing how things are carried out in Vardø. He continued to talk about the process of the community greenhouse and how it was not only for the organic vegetables that they would get at some point in the future, but as much about the process of building the greenhouse together. When I first moved to Norway, the term dugnad was new to me, although many concepts, names, and notions are quite similar in Danish. In Danish, dugnad would translate to something like “workday” which does not really embrace all the rest of such a day; the feeling of doing something together while talking and laughing, the smell of the coffee being brewed, fetching take away and eating together before agreeing that now we have to get back to work, before it gets too dark. In the Norwegian-English dictionary dugnad is described as a collective voluntary effort, and that is exactly what is taking place in Vardø – and has been for many years, in many different settings, and with diverse projects.

In the beginning, the idea of a greenhouse in Vardø was just a small seed planted in the minds of some locals who wanted more and better organic vegetables in the north. Sometimes, it is possible to get organic vegetables in Vardø, but often they have travelled a long way something that can make them less appealing. The locals looked to the Iqaluit Community Greenhouse in Nunavut, Canada, and were inspired to create something similar in Vardø. The locals formed an organisation and named it Dyrk Varanger (Grow Varanger), and as they were teamed up the architects from AHO, the idea of a community greenhouse made out of local recycled materials arose. Storing old windows, doors, and other building materials is quite common in the north, I realised. During my stay in Vardø, I met Vibeke from Båtsfjord. She grew up with a father who built several greenhouses of recycled materials in the Syltefjord Valley, approximately 50 km. from Vardø as the crow flies. For many years, the greenhouses stood there in the valley and helped Vibeke’s father grow for example rowan trees, that were distributed to gardens all over the Varanger peninsula.

”I am not much of a builder, but I would like to learn”, I told Tine back in Vardø, when she asked me if I would cut the plank in a 20-degree angle. With help from the other volunteers, I was taught how to do it and we almost finished the north-western end wall that evening. Although, the project has been going on for years now, some have been there from the very beginning, and other (like myself) have briefly touched it in one way or the other. The spontaneity of the dugnad, and the statement of “when it happens, it happens quickly” made me think of why field work was a good way of exploring Vardø. Although it involved a lot of waiting, it was valuable to be there when these things happened, to be present and able to take part in it. I believe staying in a place and trying to get to know both its human and non-human communities was a valuable way for me to get a sense of Vardø as place. I witnessed the seasons change, the berries come and go, the fireweed and angelica change colours from bright cerise and juicy lime green to dark wine red and yellow-brown. By the end of my stay, I grasped the cords of my anorak by instinct when I bicycled along Valen, the short piece of land connecting the two islands that constitute Vardø. Due to its exposed nature, Valen is especially windy, something my body remembered before I did.

The project is part of the interdisciplinary project Common Resources – Strategies for a circular, balanced and shared management of areas under pressure at AHO