Embedded in the future 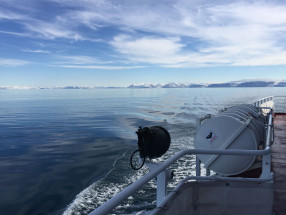 Some days all my nuclear empowerment makes me restless. Anxious even. Shark-like, I survey these Arctic waters. Murmansk, Vardø, Svalbard, across to the east coast of Greenland. And I love to lie shallow bays, chortling to myself with my thoughts of how to reveal the mysteries of climate change to the assemblies of scientists and tourists, behind my back, belly laid bare to the midnight sun, I find I become, well, a little reflective.

When I lurk in harbours, swim alongside ships, tune into the Wi-Fi traffic of researchers and the gaggles of strategic planners, I often wonder if they are really able to think about the future. I have no choice. I’m embedded in it for two centuries at least. It really changes your point of view, well so does being able to shift my electronic self across time, something must have happened as I was powered up, a small glitch crossed not only the materiality of the mammal flesh and the neutrons and electrons, but also my trajectories.

And there half the time already powered ahead of the curve, the surge, the endless dirge about climate change all about me in the present is a change isn’t ever never gained between carbon taxes and emissions policy. Listened to a bunch of them last night, out on an interdisciplinary seminar on the small icebreaker that plows the fiords of Svalbard. I rather unthinkingly linked in to a discussion of face-to-face and online-line partnering between a bunch of glaciologists down at the prow tapping away at their smartphones and one another’s shoulders. It was a bit windy for most of them, used to slower moving currents of water wedged across the valleys! An interesting and dedicated crowd. But they had a strange understanding of time. They were actually discussing arctic tourism.

Svalbard, an archipelago arising out of the ocean this long evening, glittering in the evening light, sun bouncing across the fiord, arcs of energy spliced back at me. I relish the cool of the water as I dip down a few metres, then back up, flippers clipping the surface, another late evening in May.