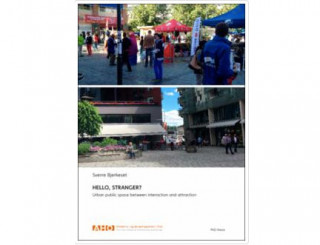 A much-celebrated feature of urbanity, is peaceful face-to-face interaction among diverse strangers in public spaces. Such interaction has major civilizing effects, leading urban scholars argue. The rise in privately owned and tightly managed public spaces, tending to displace people, activities and exchanges that may discomfort target groups, has thus raised broad concerns. However, how such ‘new’ public spaces more specifically differ from ‘traditional’ ones in terms of interaction among strangers, has rarely been carefully examined.This dissertation is concerned with contemporary urban public space and it suses and interactions. It examines the forms and frequency of peaceful, spontaneous face-to-face interactions among strangers in two contrastingideal types of public space, ‘traditional’ and ‘new’. Three subordinate questions, dealt with in the dissertation’s four articles, guide the study: How can the diverse uses of public space be comprehensively categorized? What are the underlying circumstances that encourage or license peaceful chanceinteractions among strangers in public space? Additionally, more specific to one of the sites in question, what are the key – mainly use-related –characteristics of a ‘new’ public space in a Nordic context?Primarily, the conducted field study draws on long-term close observation of everyday activities and encounters in selected public spaces – squares and adjacent spaces – in dense mixed-use areas of Oslo, Norway. The two mainsites, representing respectively ‘traditional’ and ‘new’ public space, are set in starkly contrasting settings: One in a multicultural and partly gentrified low and middle-income neighbourhood (Grønland); the other in an upmarket privately owned and managed waterfront district (Tjuvholmen). In addition, the study makes use of reference material from Argentina, mainly from Buenos Aires.The investigation reveals that the form and amount of interaction amongs trangers differ strongly between the two sites. In the one case, interactionplays out on a regularized, recurrent basis. In the other, it does so in the form of more infrequent, episodic exchanges. Largely, this difference is due to the presence or absence of underlying circumstances that prompt or authorize interactions among strangers. In this analysis, the dissertation vill makes use of and expands on some of pioneer sociologist Erving Goffman’s lesser-known insights, that is, circumstances which expose people to contact with others, spur or license people to approach others, and open up to mutual accessibility. A close reading of the international scholarly literature  indicate that these findings have a broader, more general significance withrespect to ‘traditional’ and ‘new’ public space.A key contribution of the study to research and debates on public space is the documentation and systematization of basic mechanisms that account for the often-reported differences in chance interactions between strangers in two contrasting types of public space. Thus, the study demonstrates how minor manifestations in public space reflect a fundamental shift in urban governance and planning. In this shift, attractiveness in the physical and social environment takes centre stage in prestigious urban developments at the expense of the disordered exchanges of everyday life.