Our way or the highway? : a study of the reframing of transformed road transportation infrastructure in the Nairobi Metropolitan Region 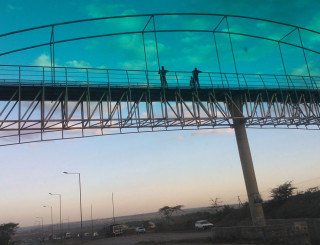 The Global South is experiencing unprecedented road infrastructure transformations accompanied by foreseen and unforeseen effects on everyday life. What are the characteristics of these transformations and what are their implications on the urban process? In this thesis I argue that varying adaptations to the transformations of road space in Nairobi herald a shift from the traditional static and decidedly situated urban settlement approaches and design interventions to a focus on movement, transience, product and signage in cities of the Global South. It is axiomatic that movement and mobility precede and sustain the entire urban process and that movement, as a social armature, fundamentally defines the nature of urbanism. Spatiality is immanently embedded in movement and the spaces of flows are also spaces of the most spirited contestation. This spirited contestation has two complementary meanings depicted in current debates on cities in transformation and confirmed to be true by my own empirical observations in Nairobi: first, that the space of flows, “is fought over by various actors and driving forces that (…) claim it, often in an inevitable conflictual manner, the right to live in it, work in it and enjoy oneself in it using its resources in a way suitable to ones own needs”, (Paloscia and Inura, 2004), and, second, that these spaces of flows, “are not accepted as such in their present economical, physical, social and cultural configuration, [they are] rejected for what [they offer] their inhabitants (and non-affluent visitors), which seems very little compared with what the metropolis takes and demands from a great number of them.” (Paloscia and Inura, 2004). To support my assertions I present cases of urban spaces along transformed road corridors and intersections in the Nairobi Metropolitan Region with a specific focus on everyday life experiences and the connections created or altered in unintended ways. I argue that such enframing and subsequent reframing of existing connections (and the resultant spatial compromises) suggest ongoing urban processes that can neither be fathomed by the current tools employed by planning agencies in Kenya under the aegis of the Ministry of Transportation and Infrastructure nor examined by compartmentalized classifications of informality. My thesis challenges static notions of hierarchical and diverse informalities. I promote, in lieu, a diachronic view of urban transformation not just as a historic process, but also as an often complex, spontaneous and evolving process that continually reconfigures space in ways that excoriate master planning tools as applied in the context of the Global South. I adapt space-time diaries, satellite mapping and empirical observations to interrogate the assumptions of planning and also to capture and present aberrant urban processes connoted by transience and movement in Nairobi’s recently transformed road space. I compare real-time observations of a variety of quotidian experiences to the visions and predictions of politicians and to the formal tools development economists, urban planners and civil engineers employ in justifying and propagating their positions on road transportation infrastructure in the Global South. Finally, I discuss what the revealed discrepancies imply for urban space design. I find as yet unrecognised categories of informality based on the mobility on highways and the shifts and slides of everyday life in Nairobi. Using an analytical framework developed from these categories and the links between different perspectives of infrastructure in the Global South, I argue that it is intellectually false to make recommendations premised on the mutual exclusivity of the processes and actions of different actors involved in infrastructure transformation. I suggest a “thinking machine” for infrastructure transformation projects that synthesises multiple elements including their timing, their inputs, their contexts and their effects.

Okello, N. (Ed.)., (2017). Our way or the highway? : a study of the reframing of transformed road transportation infrastructure in the Nairobi Metropolitan Region. AHO. CON-TEXT / Thesis: 87