The Banwan Project, From Experiment to Model? 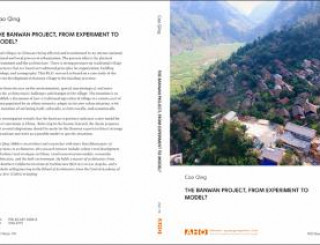 Rural policies are given priority in China, and governmental and regional funding is allocated to the countryside. Chinese villages are being transformed as a partof the urbanization and modernization process as societies, habitats, and architecture. This Ph.D. research is based on a case study of Banwan village in Guizhou province and is part of a joint program between the Oslo School of Architecture and Design and the Central Academy of Fine Arts in Beijing – “Rural China – the Villages” – the program focusing on case studies of the current challenges and development strategies for Chinese villages.

The rural transformation process is evolving in different ways all over the Chinese countryside, also in the remote parts of the country, albeit often in a less controlled way. The process of modernization through governmental and regional policies places a great deal of pressure on traditional societies, their social organization, and their way of production. Established village structures that are based on historyically -and ethnically founded principles for morphological organization, building typology, and iconography are gradually being transformed or abandoned.

Banwan village is part of a traditional habitat for the Bouyei minority. Beginning in 2016, I participated in and later observed a development project aimed at improving the living conditions in the village within the framework of Bouyei traditions and in the context of rapid urbanization. The village renovation was initiated and funded by government resources distributed to the local government. The project was planned and carried out by Professor Lyu Pinjing from the Central Academy of Arts (CAFA) in Beijing with the help of his architectural studio. CAFA provided academic support to the project and chose the Banwan village as a research subject for architectural education and academic knowledge seeking. The project received support from and was documented by Shanghai Dragon TV. Additional funds were also donated privately for the extension and renovation of the local school.

My role in the project was that of resident designer –I participated throughout the entire design and construction process – as well as that of an observer who recorded the impact of the project on the settlement and the lives of households in the post-construction phase. After having been selected as the case for my thesis, I investigated the process, the project, and the outputs as a researcher performing relevant analysis and evaluation. While the multiple identities gave rise to methodological challenges, they enabled me to access more detailed data and informal and “hidden” activities. By working in this way, I sought to understand the reasons for and the significance of each endeavor within the project and grasp the strategies and tactics employed by stakeholders in the specific situations that emerged during the working process.

The thesis discusses the environmental, spatial, morphological, and more specific architectural challenges and changes in the village and their effects on the local way of life. The intention is to (1) give an understanding of the traditional relationship between the socio-cultural and physical environment in Banwan and (2) to study the challenges and potentials established by the Chinese urbanization and modernization process by investigating the effects in the region of Guizhou, (3) to observe and evaluate the physical and social transformation process in Banwan, parallel to the renovation work and beyond, and (4) to discuss how the recent development project has affected the local situation, what the outcomes are, and what might be learned from this pilot project.

The study intends to establish a discourse on how a traditional agricultural village in a remote part of China populated by an ethnic minority might adapt to urbanization without losing itself culturally, architecturally, and economically. This is achieved by following two intersecting lines of study: investigating strategies for rural China and drawing lessons from the implementation of the Banwan project. The investigation strategies used in rural China, particularly those that have been implemented in the poor Guizhou region, help to understand the relationship between current Chinese rural development policies, rural challenges, and selected development strategies. The investigation provides a broader context for evaluating the specific Banwan project strategy. The second line of investigation – and the main part of this Ph.D. thesis – draws lessons from the ideas behind the Banwan project, the planning of the project, the implementation, and the activities after the project was terminated and the project organization no longer supported the development.

The thesis refers to a broad field of research concerning the restructuring and transformation of rural areas in China. An analytical discussion is established on what I consider to be the three overlapping stages of development: tradition, the local effects of Chinese modernization and urbanization policies in recent decades, and the outcomes and effects of the current development project. The study of place, physical structure, and architecture is inspired by a morphological tradition in urban and architectural research and is based on field investigation and mapping. Studies of the socio-spatial transformation process are based on in situ observations, interviews, and documents from the process.

The Banwan project was an experiment in what I have termed expert architect led rural renovation. The thesis outlines the characteristics of this model, evaluating ideas, organization, process, and outcome, to explore the question of whether the Banwan experience indicates a new model for village renovation in China.

The thesis indicates that the expert architects, deeply involved in the rural renovation, adapted to the conventional role of the architect in terms of attitudes, skills, and working methods. The way of organizing the project gave the architect a unique role in influencing both process and outcomes, but the participative process also allowed the expert architects to understand the community and identify collective and individual demands. The main findings are that the project worked as a well-planned architectural renovation of the village. While the process of participation was active and elaborate and influenced both program and outcome, it would have benefitted from a better-organized and stronger local leadership and from a more multidisciplinary team taking part in the process. Some unintended effects were witnessed, mostly related to the management of projects for industrial development based on handicrafts and post-implementation actions initiated by the local government. A major challenge for the project proved to be a lack of capacity at the local level of government and constraints in the institutional mechanisms that handled the development process. A possible role was noted for academic institutes in rural renovation: universities and academies could function as a supportive resource in village development, and a mutually beneficial relationship between villages and academic institutions shows interesting potential.

The thesis also indicates that choosing a Banwan model requires several conditions and deliberate consideration of the site selection. The model applies to a situation where villagers are willing to impart indigenous knowledge to the development project. The model requires an environment where local government can provide substantial political and financial support. Strong community capacity and local organization are required to achieve project objectives and sustainable improvements. Furthermore, the model is best suited for villages demonstrating historical and architectural qualities and where this resource might be used as an industrial advantage.

Referring to the lessons learned, the thesis proposes that several adaptations should be made for the Banwan expert/architect strategy to stand out and work as a possible model in specific situations. Although the Banwan project was well planned, more extensive discussions about the development programs are needed before initiating actions. Prior to the project initiation, there will be a need to strengthen the local organization and prepare locals for what is to come. The local government’s capacity to lead and manage a project of this kind in terms of role, responsibility, organization, and policies should also be prepared before the project is started. Evaluations of social effects on the village and the different families are needed as an integrated part of the process. For the Banwan model to work, an effective project management system is required to give the community better control over the decisions being made. Actions for organizational and individual capacity building in the village are needed to ensure effective project management. Another lesson from Banwan is that a multidisciplinary team might be required to address various complex issues raised during the development program. In order to solve potential conflicts during the planning and construction process, formal mechanisms need to be established. Major findings are that the project’s time span must be longer than the Banwan project period to access the strategy’s full effects and that preparations or post-construction management of what is achieved and future potentials should be given priority in the project.