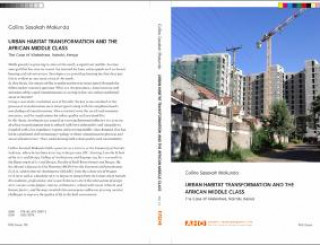 The subject of urban transformation in cities generally and in those of the global south in particular is a significant matter that requires to be understood and where possible, guide policy. The forecasting of rapid growth of cities of the south due to increasing urbanization and rapid population growth has brought with it challenges and opportunities. While poverty is growing in cities of the south, there is an emergenceof a significant middle class that has also increased the demand for basic urban goods such as decent housing and infrastructure. There is increased interest by developers toprovide housing for this class and this is evident across many cities of the south. Many of the housing developments are occurring in grey field areas meaning that they are transforming these areas into a new typology. The nature of this transformation is creating new challenges that will require to be understood and addressed.

Using a predominantly qualitative approach, the key actors involved in the process of transformation were investigated. Their strategies for achieving their desired outcomes was of key interest. Also explored was the physical outcome of the ongoing transformation as manifested in the emergent building typology of the residential area. In tandem with this, the social outcomes of the ongoing transformation were of significant interest as well. Scrutinized closely, was the growing middle class in the residential area and the ways in which it was gaining a foothold in the historically upmarket neighbourhood. The question of the urban quality and sustainability of the transforming urban habitat was an important concern in the investigation. It was explored loosely as a way of evaluating the nature of the transformation vis-à-vis the future viability of the urban habitat.

The findings of the investigation are that property developers wield the greatest degree of influence in the process of urban habitat transformation hence are shaping the course of urban development in the city. Moreover, this process is permeated by informality and irregularity. Consequently, a key morphological outcome is that a profound shift in housing typology is occurring with the development of high-rise apartment blocks in place of low-rise single family detached housing. However, this is occurring in contravention of zoning regulations that cap the height limit to mid-rise housing. As a result, a low-density residential area is transforming into a high-density one without commensurate physical and social infrastructure to support it hence potentially compromising its urban quality and sustainability. Nevertheless, the development of the apartment form of housing – ranging in type from studio to fourbedroom apartment units – is making it possible for middle-class residents – from renters to purchasers, with a wide range of incomes – to access what was, historically, an exclusive high-income residential area. This is increasing the diversity of income groups accommodated in the residential area hence creating the possibility for a more spatially inclusive urban habitat.

The investigation concludes that developers´ actions, coupled with growing middle class demand for housing, and a lax regulatory regime are leading to the rapid transformation of a residential area through a profound change in its housing typology. This has both pros and cons. Seen from an economic point of view, the densification of housing, in increasing available housing units in the property market, creates the possibility for high profits for developers and investors through a significant return on investment on housing units sold or rented. Considered from a social point of view, the densification of housing in making available more housing options, is increasing access to housing for the growing middle class who would otherwise be unable to afford housing in an historically exclusive low-density urban habitat. Viewed from an environmental point of view, while densified housing is characteristic of a compact urban form, which is considered to be a feature of sustainable urban development and increasing urban quality, this has to be accompanied by commensurate urban infrastructure. However, the absence of adequate physical and social infrastructure in the ongoing transformation of the case study urban habitat is likely to lead to the habitat´s deterioration both in terms of its urban quality and sustainability.

Thus, to achieve a viable urban habitat in the long-term, an important shift needs to occur in the manner of the transformation. The local authority needs to exercise greater control in the course of urban development for the city through better urban management. For higher density housing to work – for a growing population while enhancing the urban quality and sustainability of the evolving urban habitat – this needs to be deliberately planned for, with emerging infrastructural challenges addressed as well.