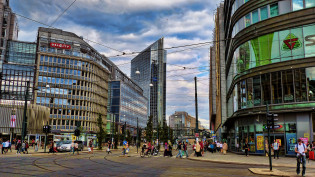 Open seminar on the multiple ways of sensing cities, with a special focus on bodily expressions in public space.

In everyday urban living our bodies and senses continuously interact with urban surroundings. The city’s many urban public spaces can be seen as theatres of sensibilities. Herein issues of affect and atmosphere, presence and emergence are brought into play. In the seminar different ways of sensing cities will be explored through a selection of ‘readings’ of urban public spaces – seen as environments for temporal-sensory experiences, encounters across difference, densities and ‘tightness’, situations and vitalist forces in play. The seminar will also touch upon issues of control, surveillance and securitization – and of the relationship between ‘free speech’ and the ‘free body’ – in the discussion of urban public spaces.

The seminar is supported by Fritt Ord and the Oslo Centre for Urban and Landscape  Studies (OCULS) at AHO.

13.00: Heidi Bergsli (researcher, NIBR): Experiencing the streets of Indian cities as a sense of democracy or chaos?

Mónica Degen: Atmospheres of the Street: how do sensory and temporal relations frame urban change?

Sensory and temporal relations are central in shaping and mediating urban experience and our sense of place. While my past work has focused on disclosing the sensory power-relations involved in the planning, designing and experiencing of urban regeneration projects, I will argue that temporality adds a further important dimension to this understanding. Hence, I suggest in this talk that urban change provides us with an opportunity to unveil how a multiplicity of temporal narratives, practices and ideologies operate at different speeds and intensities interact to produce particular urban atmospheres (Harvey 1990; Lefebvre 2004; Edensor 2010). By drawing on research projects from Barcelona (Spain) and Doha (Qatar), I argue that we need to examine how diverse ‘timescapes’ converge or conflict in urban regeneration processes across the structural and experiential level to produce particular senses of place (Adams 1990, 1998). In particular I discuss what insights might be gained for urban research if we understand urban change as a long-term process and place making as a temporal-sensory practice. At the end of the paper I would like to introduce an online ‘sensory think-kit’ that might offer suggestions and insights on how to research these often elusive and ‘soft’ infrastructures of the city.

Dr Mónica Degen is a Senior Lecturer in Cultural Sociology at Brunel University London. Her current research interests include urban life and culture, spatial politics with an emphasis on the relationship between urban change and time, and the sociology of the senses. She is the author of Sensing Cities: Regenerating Public Life in Barcelona and Manchester (Routledge, 2008). During 2016 she was a British Academy Mid-Career Research Fellow examining ‘Timescapes of Urban Change’: www.sensescitiescultures.com, and she has just finished a 2 year AHRC research network ‘Sensory Cities’, a research network that brought together academics, urban policy experts and city museum curators from Britain and Europe to share how best to research, represent and curate urban sensory landscapes: www.sensorycities.com

In the introduction to my talk I will give a short presentation of some perspectives and concepts by scholars of urban public space, such as Benjamin (the flaneur), Goffman (rituals, order and disorder) and Simmel/Schutz (the urban gaze, the stranger). In the main part of the talk, I will present some observations of situations in public spaces in Paris: in a café, a street, and on the metro. As a flaneur, observer, and a stranger, I try to understand what I see, helped by my interpretations of what happens, or what possibly happens. How to look, and what do I see? are my questions.

Heidi Bergsli: Experiencing the streets of Indian cities as a sense of democracy or chaos?

Theory of public space emphasises its role as a core arena of democracy. It is the physical space in which political ideas and conflicts are spelled out and where citizens encounter each other across social divides. In this talk, I will discuss the roles of Indian urban public space as one of encounter across difference, of livelihood and informality, but also one being hampered by growth and segregation and an ambivalent role of streets. How are urban public spaces experienced in India, and what can the Global North cities learn from them?

John Pløger: The will to presence – The Queen Louise’s Bridge

Cities want to be event cities, but it is the controlled and organized event they accept. The Queen Louise’s Bridge in Copenhagen is such seen a rare place. It is a meeting place for spontaneous party making, for sudden socializing, communication, and hanging-out. It is to visitors experienced as an ‘un-ruled’ and ‘spontaneous’ site, and the bridge has become a symbol for a certain atmosphere and mood in the city of Copenhagen everyone has to experience. What makes the bridge attractive to people? The bridge’s attraction is as a place of presence experience and the paper explores how people experience this presence. It is claimed that this might be a new urban demotic that cities have to consider as part of their everyday space planning.

Based primarily on an observational study, this paper addresses privately owned and managed public space at the Tjuvholmen waterfront development in Oslo. The four factors or processes dealt with are planning and development, design, management and, in particular, use. The main finding is that Tjuvholmen’s public spaces are characterized by ‘tightness’ and reduced publicness. As such, they share key characteristics with private-public spaces described in the literature from the US and the UK, though they in some other respects also deviate from these. While the paper argues that Tjuvholmen’s ‘ambient qualities’ are reflected in actual patterns of use, it will also speculate further along these lines. In addition, the paper presents plans to incorporate a focus on sensory and bodily experiences of space in a PhD study which, based on four case studies from Oslo (among them Tjuvholmen), ethnographically investigates conditions that support interaction among strangers in public space.

The term zombie-urbanism reflects an analytical effort to capture some typical features of current public space production, as exemplified by the ongoing redevelopment of Oslo’s harbor front. Slightly simplifying as it might be, the reason for introducing the term was first and foremost, as I will argue in my presentation, to inspire for a more thorough discussion about the qualities and contents in today’s urban public spaces. Many of the ideals behind contemporary public space production – with its emphasis on unified design and conventional staging of urban conduct – are in my view quite daunting and disturbing. The pervasiveness of such spaces, and the confluence of interests that seem to lie behind them, is a fairly new feature that we yet haven’t found a precise enough language to describe. In the second part of the presentation I will argue for an alternative vitalist way of conceptualizing both urban cultures and urban public spaces.