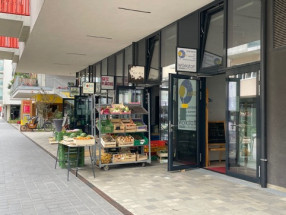 The excursion  took us to Seestadt Wien-Aspern, a new town of 20.000 people, established by 2028. Here, a Shopping Street Company was commissioned to manage the programming of the ground floors and guarantee a 12-year lease of the premises from the owners of the individual plots. While this top-down approach has proved to be quite successful, the development of the eastern part of the inner city new Sonnwendviertel allowed bottom-up initiatives to come into play. According to Robert Temel, spokesman for the platform Baukulturpolitik, the basic idea was that a good mix of plots that were sold without conditions on the free market and plots that had to meet certain criteria would create a liveable and urban district overall. The latter, so-called neighborhood houses were awarded on a two-stage concept process at a fixed price. The developers of the neighborhood houses had to insure a ground floor rent of 4 €/square meter, a very low price with the aim to support neighborhood-oriented usages. One of the projects, MIO, by housing company Heimbau, architects StudioVlayStreeruwitz and Wohn:Consult, enabled a small business community to settle in by cross-financing the ground floor rents through apartment sales, by offering extra-small units of 25 square meters and by facilitating the organization of the small businesses already during the time of planning and construction. The strategy of Sonnwendviertel to work with „bottom-up“ stepping stones along the quarter’s pedestrian promenade turns out to be a viable case with the potential to be translated into other contexts.