Is North a direction or a place? Is it a state of mind or an image? Might it be all of these?

I ask this as I look onshore from one of the most saline lakes on the planet. I am looking towards a progenitive(1) earth work built in 1970 by an artist who wanted to activate – or deactivate – the sense of the cardinal points, among other things.
It is formed as a counterclockwise spiral, extending into the Great Salt Lake, or rather, extending onto the dry salt flat that surrounds it. It spirals like my own tusk, and in the same way it facilitates the experience and sensing of the surrounding environment and landscape.
I hear people talk about it as they walk onto the salt flat. Especially on a day like today the sense of material and light becomes acute; there is no wind, no sound, and the site is flooded by a soft milky light that disguises the line where the sky meets the water. When I turn around I see the islands out there, seemingly afloat on the horizon.

The lake is drying up and it is quite shallow, so the shoreline is still far from me, and the spiral rests still another 150 meters or so from the shoreline. In fact I can barely see the spiral, but I know it is there. They only sound I hear is from the small human figures dotting the wide white expanse – a thick hard crust of salt that looks like snow, and shines like ice – crystalline. I hear them talk about how this reminds them of the multidirectional light on the beaches at Skagen, loved by the Impressionist/Realist Painters. And how the salt looks like ice, half melted, crusty and cold. They describe the new by way of the familiar. They seem to experience this dry desert landscape by way of their Northern and Arctic landscapes, and this remind me of something a Danish architect(2)  said at a conference in Greenland last spring: Everything is the same everywhere, except temperature. And maybe they are right: maybe this place is not at all that different from the North. In some spots on the beach there is even oil trickling up through the crystallized sand—which intensifies associations to a future Arctic.

The artist who made the spiral artwork on the shore of the lake reflected on the loss of direction that occurs towards the end of Alfred Hitchcock’s North by Northwest, and he also made his own movie in which he destabilizes the directional orientation of the jetty in relation to the mainland, to the Jeffersonian grid, and I might add, to the relative square-ness of the state of Utah. The site was chosen for its remoteness from New York City – difficult to get to (of course much easier these days, both for the road travelers and for those of us who can both swim and fly) – and as far from the museum world as possible.

Once a site is “in the middle of nowhere” it could be anywhere. Once it is disrupting its cardinal points it could be pointing us in any direction
The magnetic north pole wanders about 10 miles a year, but not along a straight course. North is relative. It will become South some day when the magnetic field of the Earth flips yet again. On this particular October afternoon the shore of the Great Salt Lake became North by association for the two northern researchers that I overheard. For them, the notion of site that was so important to the artist, expanded into a place for human visitation. They were more concerned with the strand flat (sandy, oily, crystalline, icy), the horizon of light and soft sounds of people, than with the spiral itself. The landscape surrounding the spiral became a place, not in Lucy Lippard’s sense—people do no actually live and work here—but a site for human exploration of the light, the salt encrustations and the water that is so briny that the ripples seem static. It became a place of acute sensing of the environment. 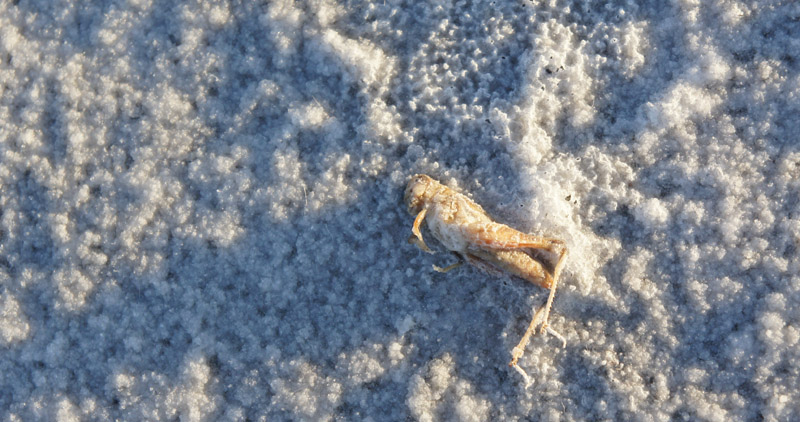 This is so similar to what these researchers are concerned with in the Arctic. Those wide expanses of material terrain, those white open spaces that has to be considered less as material, less as reservoirs of oil and minerals, than as places for people. The oil they spotted by the lake may be traces of past pollution, but contributes to forming the place as an allegorical sensory space – that might lie North.
One cannot help but think that this natural beach flat, exposed now due to the low water level, might widen as the landscape becomes steadily drier—making it appear even more as a desert landscape. As the Magnetic North Pole wanders, constantly redefining what direction is North, and as the landscape of this once mighty lake transforms, it may eventually become North as a place and not just as an image or a point on the compass.

(1) Quoting Bill Fox, a travel companion in the Arctic and the director of the Center for Art + Enviroment in Reno, Nevada.