Standing on the quayside, opposite the house of Jules Verne, one would not be surprised to see the mechanical Nautilus or its accompanying giant squid breaking the green waters of the Loire. One almost also expects to see estuary dolphins jump through Daniel Buren’s giant loops along the new promenade of the harbourfront transformation area, designating it as a public urban space through signature art (In the case of Buren: always striped).

On the Île we also find a variety of animals and machines, such as the zoomorphic machine that slowly transports people between the Leonardo Da Vinci inspired carrousels in the former shipyard on the western tip of the island.

Urban development is creeping over the island at a pace as excruciatingly slow as that of the giant pneumatically animated elephant. Other constructed ‘elephants’ such as Jean Nouvel’s tribunal building and Lacaton and Vassal’s school of architecture had to be built by the state to build momentum and draw the attention of private developers.

As it turned out, a multi-storey parking garage was the first private investment to make landfall, and since then other architectural ‘animals’ have emerged, including wooden residential buildings, an office block with aluminium facades and bird twitter, housing blocks with facades of cascading greenery, an apparently animated bus that seems to have jumped and inserted itself into a multi-storey building, and a blue cloud that is a bar.

The old has also become new: “lipstick” has been smeared on to the facades of the grey 1960s shopping centre ‘elephant’, and cantilevering walkways seem to grow organically out of the former shipyard hangars. In addition we find old cranes that have been lovingly restored for historical-didactic reasons, a left-over WW2 bunker, and workshop buildings with their facades torn off to reveal new public spaces inside. It is a veritable menagerie—an architectural zoo to be consumed by locals and visitors alike.

Urban redevelopment of the brownfield harbour area is part of the regional development of the so-called “Estuary Metropolis” that stretches from Nantes to Saint-Nazaire. Importing culture is now a standard tool in urban brownfield regeneration particularly in the form of “Creative Districts” in which artists and cultural entrepreneurs create vibrant and alternative spaces that attract other entrepreneurs – both in conventional industries, but also in media, technology and culture.

The model is well known, perhaps most famously from the DUMBO area of New York, where artists moving into old warehouses created an urban buzz that developers quickly saw as that ‘little extra’ that would appeal to home-hunting connoisseurs—and the quaint old-fashioned carrousel added to the charm of the area. 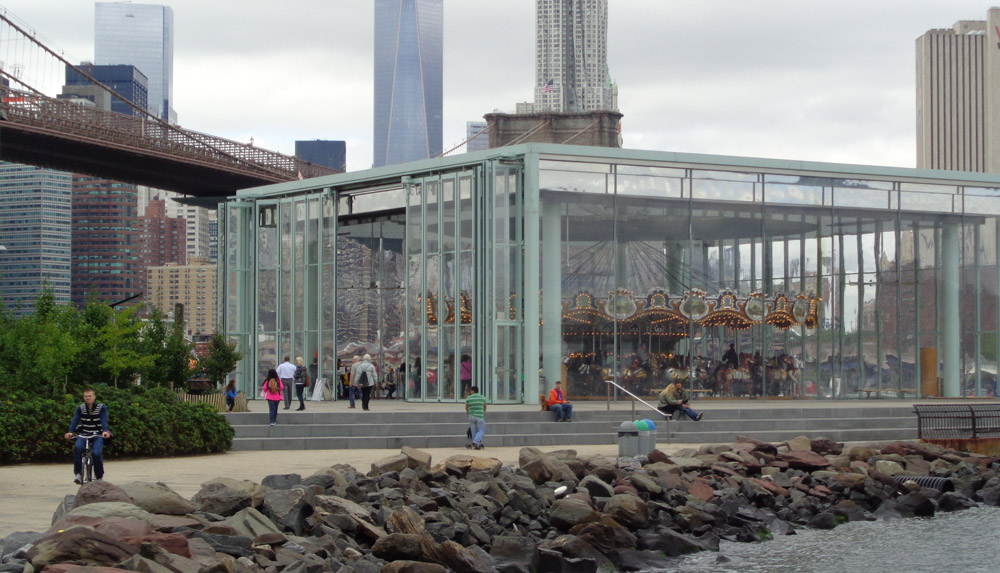 Down Under the Manhattan Bridge Overpass

In Nantes the ‘Elephant’ model is applied to kick-start regeneration of a brownfield area, but importantly also to boost the image of the nascent regional metropole in order to further economic development, job creation and general economic sustainability in the competition with other, larger cities and regions.

Where infrastructure is perhaps often seen as the generator of regionalization (Think: Malmö+København connected by the Öresund Bridge), the regional ‘glue’ being concocted along the Loire contains a large proportion of culture: a shared maritime history, but also a contemporary creative image celebrated in a bi-annual cultural festival—and potentially, an attractive, cultural entrepreneurial scene.

The animals of the Île de Nantes inhabit not only the island, but also the river and the estuary. The development of the particular post-industrial area is projected into a larger regional context, which fundamentally transforms it into another kind of elephant, one that is not just about property development (or gentrification), as its Dumbo cousin, but one that engages in the possibility of (re)inventing a large-scale regional city.

The elephant of Nantes is specific compared to the Dumbo reference, and one might say that it is site specific by being “larger than life”—it is, perhaps, a regional animal.

And site specific in this context refers not only to a static reading of history, memory and cultural values in a location, but to the possibility for imagining a future—through culture as a space—and in a site. 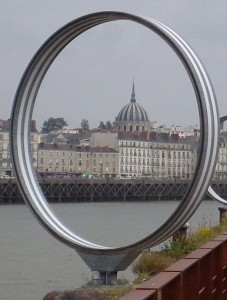 In September 2015 the teams from Malmø, Copehagen and Oslo visited Nantes and Saint-Nazaire in France to look at ongoing harbourfront transformation processes.

See the Morten Ednes’ (Norwegian Center for Architecture and Design) report from the field trip to Nantes and Saint-Nazaire.