Lines of and in the North 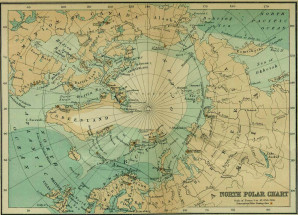 Geographic lines are representations of difference and distribution of phenomena in space. Lines are also tools for reading and conceptualizing landscapes: they may be concrete—perceptual—but also abstract figures of a more analytically based models that describe underlying structures of the landscapes we visit, walk, document and discuss.

Alexander von Humboldt, the geographer, explorer and botanist of the late 18th and early 19th century is the inventor of the isotherm line—an isoline—a means of graphically representing a threshold value of a physical phenomena distributed in space by connecting points with the same average temperature with a line. In turn this invention made the division of the World into geographically referenced climate zones possible—including the Arctic. This provided an scientific definition of the area of the extreme north— supplementing other perceptions of the territory of the North as defined by remoteness and accessibility to certain natural resources such as whales and their precious oil.

The most common definitions of the the Arctic is that of the 10°C isotherm – the areas in which the average temperature in July is below 10 degrees centigrades. The 10°C isotherm closely (but not entirely) follows the tree line. Humboldt was a pioneer biogeographer, documenting the spatial distribution of plants—demonstrating that certain species are spatially restricted to certain climatic zones. The tree line is such an isoline—a graphic separator of two conditions—one in which trees can survive and thrive and one in which climatic conditions are too harsh for them to grow. Another important line of the North with a scientific definition is of course the Polar Circle – simply the line above which the sun is both continuously above and below the horizon for periods exceeding 24 hours during the year. The receding line of the Arctic Sea ice cover is an example of a line that describes a dynamic phenomena that varies over the seasons and years.

Janike and Peter presented a paper at the Archives of the Arctic. Ice, Entropy and Memory Conference at the Humboldt University in Berlin, arguing that landscapes of the north—akin to landscapes elsewhere—are demarcated by lines.
What we asked ourselves was if different ways of applying lines in the landscape is useful in a reading of the particular configuration of mineralogy and urbanism that makes out the Northern landscape of the Kola Peninsula that we recently visited: We walked lines, we observed the line of the horizon, and we added more abstract structures of lines such as what we described as cuts of horizontal and a vertical desire – the desire for and dependency on the prehistorically formed layers of minerals, and the desire for grand human manifestations.

What we found was that immediate lines—such as routes and sight-lines—became substituted by a more abstract set of lines, informed by our movement through and observations in the landscape. Maybe one could say that by employing lines that are practical, such as lines of walking and seeing, and abstract, such as those that starts interpreting the future and projecting the past, we start to try to look with the landscape, as Tim Ingold would describe it—not at it.