New publication: Under Under 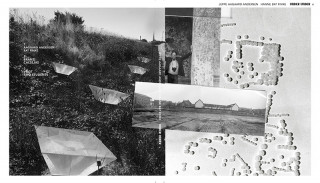 Under Under is a recently launched initiative at the Institute of Urbanism and Landscape, Oslo School of Architecture and Design. It’s a quarterly publication, under the direction of architect and researcher Luis Callejas, that set forth to “link the work and thoughts of practitioners, educators, and researchers in the field landscape, architecture, urbanism, and the visual arts.” The inaugural issue is dedicated to the works of Hanne Bat Finke, and, in particular, the late Jeppe Aagard Andersen. It has been edited and designed by Luis Callejas and Christiana Pitsillidou, with Peter Hemmersam and Marianne Skjulhaug as guest editors. Morgan Alexander Ip proofread all contributions.

[Introduction to the inaugural issue, September/October 2018, by Luis Callejas]

Under Under is a publication that links the works and thoughts of practitioners, educators, and researchers in the fields of landscape architecture, architecture, urbanism, and the visual arts.

Under Under’s main ambition is to generate a new reading of two designers or researchers by seeing their work paired together.

Under Under’s approach is to experiment liberally with text and images under the purview of an editorial team of designers that changes every four issues.

This editorial experiment attempts to reveal images and ideas that have not necessarily had the chance to solidify as built projects or in academically rigorous media. The editors must first select work that they believe deserves some form of inquiry, and secondly, they must attempt to build new knowledge by pairing two different bodies of work or perspectives. Sometimes the link will be obvious; the designers may have worked together or shared the same space or studios, or there may otherwise be a clear influence of one over the other. Linkages may also be generational, more horizontal, or involve an intellectual love affair from a distance.

In any case, each pairing aims to prove how ideas have travelled in time and space, and may even redefine professional and academic paths. Ideally, the pairings will reveal that images and ideas that have remained under the radar manage to have a meaningful influence on fellow practitioners and researchers. Some of the pairings will also attempt to link disciplines, as some ideas and projects that have clear visibility in one design field may deserve more attention in another.

Each issue will be comprised of a main body of text, either as an interview or as two essays discussing each other’s work, and will be accompanied with a set of images that attempt to create a visual link between stories. The editors privilege images and conversation over scientific rigour, exposing material that has not been published, has been archived for a long time, or for some reason has remained undercover.

Further, with each issue of Under Under there will be a film documenting the conversations. The films will serve as a base for the texts, and presents the designers in their singular context or when they first meet. These movies will be found at

For this inaugural edition, we chose to open Jeppe Aagaard Andersen’s archive. Andersen’s influence is not questioned, however, precisely because of his visibility as a practitioner, widely available media usually focuses on his built works. Hanne Bat Finke helps us read his work, also elaborating on his legacy for Danish landscape architecture. Hanne’s own experimental production is presented together with Andersen’s archival material.

The recent and generous donation of Andersen’s archive to The Oslo School of Architecture and Design came while preparing the first number of Under Under. We saw the opportunity to offer a first glimpse into his archive and decided to begin the series with some of his least known experiments, as well as his own photographs of travels and built work. When looking through his archive we discovered that the words he used recently in his last interview were still beautifully linked to the images he captured decades ago.