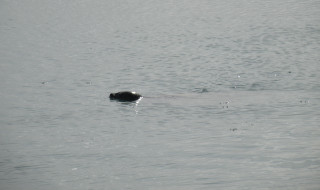 I’ve kept quiet for a long time now. Centuries of lips sealed and horn retracted. Learned that one from the invention of the telescope. They have found me neverthless, explorers, mariners and hunters of the north.

But its’s time to show up and shout out. Time that someone shaped these stories of the far far north. Alas. As if anyone can here me in this Arctic blizzard as the autumnal shifts seize the ice and toss it about in the shallower water.

But it’s my beginning, Shouting against the wind and force. My head above the waves, ice fragments bobbing about me, my horn pointing skywards, an antenna to reason.

Stars shone for the midnight sun

On 5 March 1953, two scientists found themselves sitting on opposite banks of the their border river. It was a warm Arctic evening, the pale sky luminous above them. The Norwegain turned on his radio, and then quickly turned it up. A special item.

‘The Death of Stalin. An era has ended.’

And he leapt for joy and yelled out his happiness to the heavens, still starless. The Russian put down his rod, and waited. Such was his life, often. They had spoken several times earlier in the month when they unexpectedly met near the narrow crossing point that was always under surveillance. So they knew they both spoke Russian.

‘What is it?’ Shouted the Russian.

‘It’s Stalin!’ yelled the Norwegian. Enough to make any Russian squirm, that the giant might appear and not just look, his magnetic horrors about to stick to you, this quiet scientific mind beside a small river, waiting for a catch. ‘DEAD! DEAD! DEAD!’ the Norwegian sang.

And then they were both laughing and shouting and yolding and yipping and skipping with joy.

In a bid to celebrate the death of Stalin with alcohol, to wash away all they could remember in one night of foul spirit, they agreed to meet the next evening, both thinking to themselves that there might be a real future for science after all.

That night they dreamed the same dream. The stars came out in the bright sky of the midnight sky, defying physics, upending the sagas, a watery light they had never seen. And in that sky they saw something fly past them. Just a glimmer of a shape, indescribable, compelling, glimpsed and then even fuzzier as the dawn, itself awake all night, continued into the heat of day.

It was a shape, a shadow, a mammal they knew, now airborne, the grit of last night’s drinking crusty in their eyes. Spectacular. Mythical. Unicorn of the seas now airborne.

They met later in the week and knew they had seen something of the near future, the imaginary now shared. So they drank some more and made their pact. They never spoke of it to others. They met secretly and fashioned their flight of fancy, biology meeting nuclear science.

To create a nuclear powered narwhale. To secure and augment a living example of the mythical unicorn of the seas, that notoriously shy mammal of the icy arctic water. To invent beyond today’s boundaries and the creative and thought landscape of their borders.

Over fifty years later the fruits of their labour has been sighted in the northern sea routes. A new mythology is unfolding, an unexpected device for reading the here-and-now and projecting the future via the Future North project.

Yes, that’s me, Naratta, reading this all backwards and forwards. Design fiction materialised!

Follow this space and you’ll see what I have in store for you.