As we venture north and east in order to observe urban and territorial change on the Kola Peninsula, we travel through regions whose contemporary built environment dates back only to the third decade of the last century. Visiting the mining towns of Zapolyarny, Kirovsk, Apatity and Monchegorsk what we see and what is revealed to us in terms of urban history and monuments are 1930s city plans, 20th century architecture often referred to as Stalin-, Khrushchev-, and Brezhnev-era residential zones, and WW2 memorials.

Onto the Kola territory we are projecting our sight and imagination, as suggested by Smudge Studio. We are often observing the paradoxical intersection of the horizontal lay of the land and the vertical desires that informs its operative industry, a mining industry that processes iron ore and releases millions of tons of sulphites into the atmosphere every year. Minerals were ground-forming for eight of the Kola towns, and still represent the dominant means of sustenance.

The Kola Peninsula is called the treasure peninsula of the world. More than a thousand minerals have been found. These are not all deposits, which would mean they are not found in ores rich enough to be exploited industrially. They have however been registered. Given that only a little over 4000 minerals have been registered across the global, this means the Kola harbours 25 % of all known minerals, most of them located in the Khibiny mountains and Kovdor. This means that the relatively small area of Apatity and Kirovsk form a melting pot of meshed mineral composites such as complex forms of Apatit containing Nefelin, titanium, and titanium magnetites, and Iron ore which also contains three types of mica, and vermiculite. Exploration on the Kola peninsula has revealed enormous deposits of gold, platinum and silver (to mention a few) located in the yet impassable north eastern tracts of land on the peninsula.

Kola is situated on the Baltic shield, one of the earth’s ancient shields. This means that beyond the 20th century’s layering of planned urban surfaces, parks, and infrastructure we see no historically situated materials until the eye reaches the open pit mining areas (and their processing fumes), physical manifestations of layer of the earth that dates back to prehistory.

The landscapes of Kola emerge to us simultaneously as ancient geological formations, and as  visually thick layers representing the period from 1916 to 1991: railroads, roads, mines, tailings, factories, power lines, housing blocks.

The most significant layers in the landscape are those representing political events: the initial urbanization spurred on by the building of the railroad in 1916 revolution as part of the armed conflict of the revolution.

The other significant layer is that left by the Second World War. This layer is less physical, but leaves a significant reading in the form of memorials, monuments, memories and stories. This event also connected the landscapes of Kola with conflict and strategic war effort: Nickel was a strategic war supply over which the horrific three-year battle of Litsa Valley was fought. The layers of this event are also visible in the construction of the nickel processing facilities of Monchegorsk, particularly in the monumental buildings of the Metalurgica Prospect in the immediate aftermath of the war, built by German prisoners of war (and built very well!). 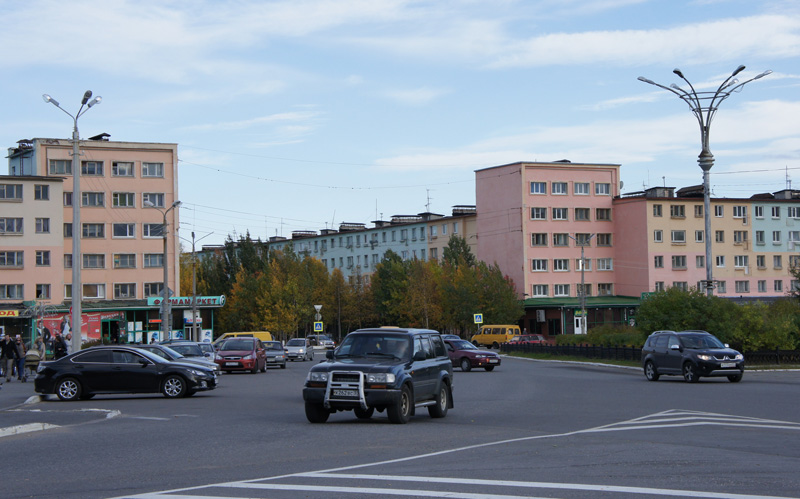 We find the peninsula’s landscapes to paradoxically manifest an intersection of horizontal and a vertical desires. On the one hand there is the desire for and dependency on the prehistorically formed layers of minerals, while on the other is a desire for grander human scale plans of urban environments.

These cuts are forceful in that they allow us to think about ways of reading landscapes of the north and how they are specific and unique. Trying to project our imagination into their futures, we see there is no escape from such dominant structuring of their logics.